Here’s another extract from my forthcoming book “On Square Routes”.  “OSR” will be a collection of more memoirs in the tradition of “In Complete Circles”, but will also feature travel writing, short stories and poetry.

Below is a semi-fictionalised account of an incident from my primary school days back in the dark ’80s:

It was a dull spring day in 1983.  Our primary six teacher Mr Arthurs had set us an exercise in fractions, something my nine year old self had found particularly difficult.  He let us get on with the work, while he sat at his desk reading the paper.  Maths had never been one of my strengths at school.  Naturally I got distracted.  I looked out the window and began to daydream.

On the other side of the window a man was cleaning the pane and giving it considerable elbow grease.

Joe Gorman sitting at the desk behind mine pointed out that the window cleaner looked like Manchester United’s Dutch centre forward Arnold Muhren.  On closer inspection there was certainly a passing resemblance.  Though why a well-paid sports star with one of Europe’s top clubs would be cleaning windows at a primary school in Omagh was something of a mystery.  So I began to concoct a story in my head.

Maybe he’d had a row with his boss Ron Atkinson, left Old Trafford in disgrace, and was unable to move to another club for contractual reasons, then having fallen on hard times due to gambling and addiction brought on by the inevitable bout of depression he must have gone through, and unable to return and face the shame in his native Netherlands he’d ended up cleaning the windows of a primary school in Omagh.

To this day I wonder if this was really a normal pattern of thought for a nine year old.

In the next row of desks Mark Mullan caught my attention:

“Hey Wardy!” he called out in a loud whisper.

I looked up to see him giving the rude two-fingered sign to the window-cleaning Arnold Muhren lookalike.  This was a little ironic as young Mullan was actually a Manchester United supporter.  But I suspected his aim on this occasion was simply to try and make me laugh.  He certainly succeeded.

In fact I involuntarily laughed out loud and had to put my hand over my mouth to prevent a further uncontrollable fit of giggling.  This prompted a stern rebuke from Mr Arthurs.

A few days later the real Mr Muhren was in action against Brighton in the FA Cup final.  But somewhat fittingly we never saw that window cleaner again.

A goal of Iniesta-mable value

Not the greatest ever World Cup, but at least there’s a new name on the trophy.   The irony is that the only team who remained unbeaten throughout the tournament were New Zealand.

Those who thought the quality of the games played was well below the expected standards may well think FIFA stands for “Football Is Fucking Awful”.

Any regular readers who have been bored by the amount of World Cup stories in this blog of late can now take consolation from the fact there probably won’t be any more for another 4 years.  Now it’s time to concentrate on something else.
Apparently there’s some kind of bike race on in France at the moment…
One things for sure is that one group of Orangemen won’t be celebrating on the 12th of July!  (And it isn’t Armagh). 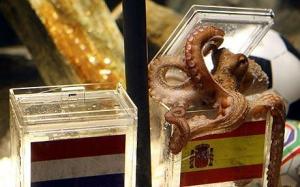