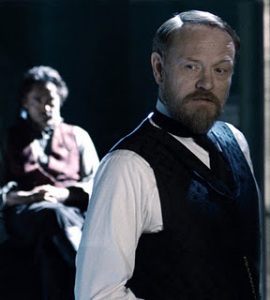 I helped celebrate the Christmas season of 2011/2012 by going to see the new Sherlock Holmes movie, “A Game of Shadows”, starring Robert Downey Jr as the titular hero, Jude Law as Dr Watson, and Stephen Fry appearing as Holmes’ brother Mycroft. Another newcomer was Jared Harris as Professor Moriarty, son of the late Irish actor Richard Harris. As with the first movie in this series, CW warned me beforehand about expecting too much authenticity, or anticipating that the plot would remain strictly faithful to the original canons of Conan Doyle. I took his warning to heart, and am very glad I did, because I was thus able to take the movie on its own merits, and found myself taking in over two hours of what I consider to be very mindless escapism and great fun.

As CW rightly warned, there was practically no link between what happened in the film and the original Holmes creation in the stories, the first glaring error being the relationship between Downey Jr and Law, with the abrasive nature of their communication between each other in the picture more closely resembling that between Bodie and Doyle in “The Professionals” than the mutually respectful regard that both had for each other in the canon.  Historically, too, there were glaring inaccuracies with some of the weaponry deployed by the protagonists not being invented until years later (I mean, a submachine gun in 1891!).

Professor Moriarty, rather than being merely a criminal mastermind “godfather” figure, was transformed into a more Dr Strangelove type of character, bent on causing international mayhem through a major European war, which he then planned to fuel by arms sales from his munitions factories.   The plot of the story was very thin, and indeed, in at various points was a little difficult to follow (not to mention incredibly far fetched!), but it certainly had its moments. Fry was a deliciously eccentric Mycroft, and, as with the first movie in this series, the special effects and action scenes were fantastic, being fast paced and frenetic and served to hold the the plot together, sweep it along, and hold the interest of the audience (well, me at least!).

Perhaps most interesting was Jared Harris who played the part of the Jekyll and Hyde figure of Moriarty with great aplomb, and is someone to look out for in the future.

Altogether, I heartily recommend a viewing, provided that you don’t expect much fidelity to the original stories!